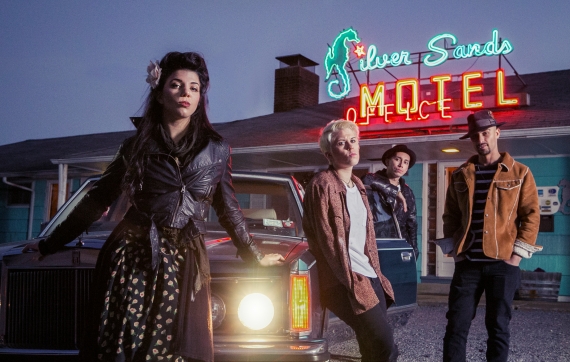 New York-based rockers, Midnight Mob have recently released to brand new singles, as well as, having a new EP on the way. So we decided to catch up with vocalist Blackey Deathproofrom Midnight Mob to catch to them about what they have planned this year!

“Fantastic thank you!  Excited to be getting out all of our new material and get back on stage.”

You have just released your new single 'Swing On', can you tell me a little bit about the track?

“Sure! ‘Swing On’ was literally the last minute, barely caught the train, addition to the EP. ‘Swing On’ evolved from another original we used to do called ‘Pull The Trigger,’ which you can hear a live version of on our ‘Black Moon Rising’ EP.  We were looking to reinvent ‘Pull The Trigger’ and Squeeze got the idea to take the main riff and try it with a groovier drum beat. It worked right off the bat literally a week before we were scheduled to record. The lyrics are personal dealing with my vices, breaking myself down and fighting to rebuild myself back up again. No pain no gain.”

What made you decide to release it as your new single?

“We decided to release it as our first single because we felt it was the catchiest and had the most potential for exposure because it can fit into a few genres. It has a great groove that makes you wanna move, plays well in the hard rock market, touches a metal note as well, but can still has the ability to cross over into the rock country world. ‘Swing On’ we also felt was the glue that bonded this album together and rounded out the music on a whole perfectly.”

You will be releasing your new EP 'Honest Brutal Glorious' this year, can you tell me a little bit about the release?

“Great question! Yes the new EP will be released in late March on all downloading platforms and we will also be selling physical copies through our website at www.MidnightMobFans.com/Shop if that is your fancy.  This new EP, ‘Honest Brutal Glorious’, will feature six tracks of high-octane rock n roll, two singles (‘Swing On’ and ‘Ghosts’) and two videos.”

How would you say your new EP will compare to that of your previous releases?

“The biggest difference is that we have a completely different drummer, Chris Beatz. The foundation to every band is your drummer. Chris allowed us to experiment more musically since he had a lot more tools in the toolbox.  This led us to be more creative, intricate and complex. We were able to grow into a much more mature songwriting machine.  The other big difference was that these songs came about out of utter chaos & turmoil.”

What do you think sets you apart from other bands and artists on the scene?

“I think we’re extremely unique in our makeup. It’s a female fronted four piece that includes a female bass player, and we’re both are respected among other musicians. Our music also is its own thing, only we can have these songs sound the way they do. We inject our own passion and energy into our writing sessions, recording sessions and live performance. Each member lends a unique fingerprint on each song. We are rooted in blues and classic music but keep our arms wide open to embrace modern ideas.”

“I love Pokémon and know the pokerap.”

Will fans be able to see you live anytime soon?

“For sure!  Here are the near future confirmed dates so far:

“We’re always adding dates so feel free to stop by www.MidnightMob.com for all show/news updates.”

“We’re really excited to see what doors this new EP opens for us. Already the new EP got us added to one of the main stages at the Launch Music Conference & Festival in April and we were also added to the Fashion Meets Music Festival in September.”