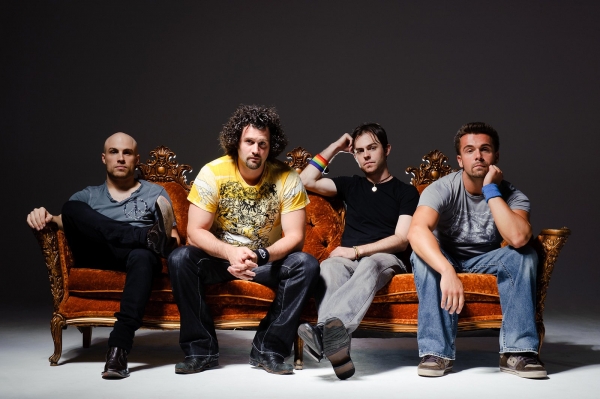 The Energy are set to release their new album ‘When We Were Young’ later this year, so we took the opportunity to catch up with the band to chat about their new album and find out just what you can expect from the album!

“Doing great! Super psyched about the new album and to be featured in Shout It Loud.”

You will be releasing your album 'When We Were Young' this year can you tell me a little bit about the release?

“Totally! It’s our fifth album as a band and our third with the current lineup. The first of those three, ‘Realize Your Sin’, was recorded at a time when I think we felt we had a lot to prove, so it can sound experimental at times. On the following album, ‘Streets of In-Between’, we took a more intentionally commercial approach. The songs are purposefully more catchy, and for production we worked with Scott Riebling, who had worked with bands like Fall Out Boy and We The Kings. By the time we started working on the songs for ‘When We Were Young’ I think we were done trying to impress anyone, we just wanted to write and play songs that we enjoyed. I think we wound up with a sound that is a lot more our own. There’s definitely some experimentation, more guitar solos, some odd time signatures, but still very accessible song structures. So deciding to call the album When We Were Young was a little bit of a play on the fact that this feels like our most “mature” effort yet.”

What and who has influenced your lyrics?

“As a rock band, we try to have fun with what we do, but we also want our music to mean something, and a lot of times that’s the job of the lyrics. So that could be bands who have similar depth—classic acts like U2 or Springsteen. It could also be places we’ve travelled, things we’ve read, current events. Some of our songs are political but not overtly so. “When We Were Young,” the title track of the new album, is kind of a plea for a more direct, honest type of relationship, which could be read either personally or politically, especially in our current political climate.”

What can fans expect from your new album?

“We try to be pretty humble when it comes to self-promotion, but we really believe there’s something for everyone on this album. There’s a lot of heavy riffing on some tracks, with odd times signatures and long guitar solos—tracks like “Free” and “You Can Follow” fall into that category. “American Disaster” just loud, in-your-face dance-rock. But then after all that heavy riffage and all those belted-out choruses we close with “Little Man,” which is kind of Adam’s lullaby to his first-born son. Every rocker has to have one of those, right?”

What was the writing and recording process like for the album?

“The process was different from our last two records. We recorded it over a longer period of time, which gave us more time to hone song structures and edit lyrics, even try stuff out in a live setting. It’s one of the luxuries that comes from being an independent band, we’ve just never allowed ourselves that before. In the past we’ve kind of operated like our own record label, giving ourselves strict deadlines, etc. It was nice to take our time this time around. Additionally, although we started the process with Scott, three of the songs, including the title track, we recorded with Mike Watts and his team at VuDu studios. So that was a great learning experience too, working with slightly different production styles and in getting different people’s takes on our sound.”

You have released your new single and title track 'When We Were Young', can you tell me a little bit about the track?

“Like many of our best songs it emerged both spontaneously but also went through revision. Adam actually came up with the initial idea for the song when he was visiting his in-laws in Vancouver. He was coming back from Granvile Island, which is a really cool local market when the chorus melody suddenly popped into his head: “Oh when we were young; oh, we could not fight it. Our lives had just begun- when we were young; when we were young”. The melody was hooky and the lyrics were accessible. But they also sort of carried a larger message: youth and rebellion, how you feel so strongly about certain injustices when you’re a kid, but you can’t really do anything about them, frustration with powerful leaders or a corrupt government. Sonically it starts out all smoky and mysterious but the chorus is just bursting with heat—definitely a song worth listening to carefully but also fun to play live.”

“Hopefully a lot more playing out! We really wound down our touring schedule over the last months to focus on recording ‘When We Were Young’, but we’ve always been a live band at heart. At our peak times we’ve done 100 shows a year and it’s really that direct connection with the fans that keeps us going. So we’re eager to get back onstage and make that direct connection again. We’ll be doing our album release at Webster Hall in New York on April 23, then hopefully getting back to some familiar East Coast spots like Boston, Philly, DC, etc. as we shake the dust off.”

“Aside from getting out and playing more again just trying to build on the artistic success of this latest project. After taking pretty widely divergent approaches on our previous two albums, ‘When We Were Young’ feels like a return to a happy medium, a real discovery of “our” sound. So we’ll definitely keep writing and hope to just deepen that sound, now that we feel at home in our own shoes, as it were. We’ll see!”

“The Energy Music on Facebook is the best for networking, but you can also hear most of our tracks over on SoundCloud.”