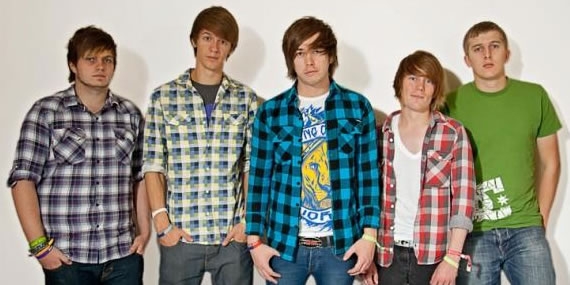 The first ever review I posted on the site was for a band called The City Calls, check out the review here if you haven’t seen it already http://www.wix.com/chloebevan/shoutitloudreviews/apps/blog/the-city-calls-a-spark-to-ignite .

This was an album I fell in love with from the first moment I heard it. But about a week ago now, I got the chance to interview Lucas Hardy, lead singer of the band and here’s the interview below.

Who and what are your influences?

“We're influenced by so many different bands. We love Pop Punk but we were all brought up on different bands and genres too. It makes for an interesting writing process as everyone has different ideas based on their influences.”

What does the future hold for the band now that 3 members are parting ways?

“We're looking into the future with positivity and excitement. The whole time with the guys deciding to leave was horrible, no doubt about it. But it's all been done because we want to take the band to the next level and that means putting more of our time into it. So, the future will hold more and more for The City Calls and we are stoked about that.”

Where do you hope/realistically see 'The City Calls' in 5/10 years’ time?

“In 5 years we hope to be making kickass records, touring the world and having as many people as possible know about The City Calls. It's what we've always been aiming for and we want it to happen.”

What is your favourite song from the new album and why?

“Personally my favourite is Meet In The Middle, I can't speak for Scotty but I'm pretty sure he'd agree. It was the last song we finished for the record and it shows our progression and it has the biggest sound of the whole record. I think it showcases our band well and gives everyone an idea of what to expect in the future.”

Are your fans likely to see any new music soon?

“We have ideas flying about but we're working on the line-up right now and spreading the word of the April tour. Come late April/May we'll be working on the future full force. Anything new and up to date on music check out Facebook and Twitter!”

Do you prefer the recording and writing process or the touring and doing shows?

“They're both such different experiences it's hard to choose what my preference is. Recording songs you get a massive sense of achievement and when you hear a final mix of a new song you get that awesome chill of excitement. With touring you get mega anticipation to get onstage and the adrenaline of performing your songs for everyone. Both different feelings and aspects of fun but equally preferred!”

What can the fans expect from the Stop/Drop/Rock Tour?

“It's packed full of awesome bands so people can expect a solid awesome rock show. We're hitting our hometown April 11th Southampton Joiners and the other bands are hitting their hometowns so it's going to be awesome every night. Not a tour to miss.”

What do you want people to take from your music when they listen to it?

“I'd like people to take what they want from it. Whether it's a song to get them pumped for something, a song to think about any problems that's going on for them, a song to dance to, anything. I'd just like people to enjoy listening to the music for whatever reason that may be. We are thankful for anyone who has listened to our music and even more thankful for everyone that wants to listen to it again and again.”

Why should people listen to 'The City Calls'?

“We are a band that has a lot of fun with what we do, we want to write music that means something to us and music that people can enjoy and have a good time with. If the music means something to someone else then that's awesome too. That's a good reason why you should listen to The City Calls, just in case you might realllllyyyy dig it, haha.”

Describe the band in 3 words

@Mynameisterrix asked: If you could feature one musician in a TCC song who would you like to work with most?

“Personally I'd either have Dave Grohl shred some drums on a song of ours or have a vocal duet with Hayley Williams. Either would be sweet. That's just me though haha.”

Sarah asked: Besides The City Calls, who is your favourite band/ artist?

“My two favourite bands are blink-182 and Motion City Soundtrack. Blink are the band that got me wanting to start my own band and they introduced me to Motion City, I love the lyrical style of Justin Pierre.”

Make sure to like the band on Facebook as well as going and buying their new mini album http://www.facebook.com/TheCityCalls/app_150178545006427 . Be sure to check them out on their up and coming tour too. All the date can be found on their website http://thecitycalls.co.uk/ .