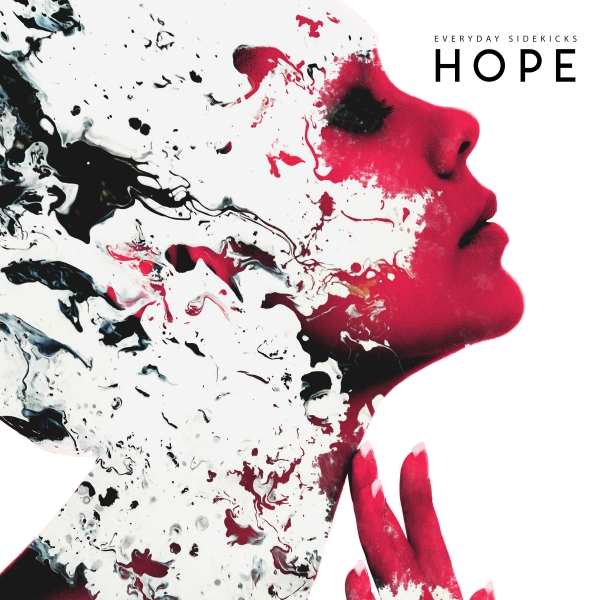 Since forming back in 2012 post-hardcore outfit Everyday SideKicks have graced the stage alongside the likes of Marmozets, Palm Reader and Astroid Boys, and being able to brag about rubbing shoulders with some of the industries finest shows they are onto something big.

The band’s latest effort has seen them adopt Monnow Valley Studios for the recording process with producer Tom Manning pushing them to shape their new sound. “He pushed us to play better and really put in the effort so that we feel now that a big part of our sound has actually come from working with him”, reveals singer Archie Hatfield.

With “Hope”, Everyday sidekicks have delivered variation through contrast. Being displayed across their instrumental sections as clean, melodic pieces act as embellishments throughout an otherwise abrasive and harsh soundscape.  This inspired practice of writing allows each note to breathe, acting as a refreshing change of pace amidst the riff-laden chaos of some tracks. This transition of sound is most apparent during “Lacuna”. Inspired by the genre defining writings of Architects late guitarist Tom Searle, the track serves as an interlude, adding ambiance and atmosphere that manages to have just a profound impact as the slamming guitars found across the rest of the release.

However, it’s at these more intense moments where “Hope” comes into its own. The quartet showcases their technical ability with their instruments, which is ever present in the closing track “Business Secrets Of The Pharaohs”.  Stating that they wanted to close the album with “something people could really move to live”, the release’s farewell struggles to contain its own energy. The track comes out swinging, with malevolent riffs pummeling your ears from the get-go, bringing to mind genre heavyweights like “While She Sleeps” and “Beartooth”.

Lyrically “hope” exercises its Catharsis from the beginning, the track “Fracture” tackles the validity of the at times tyrannous music industry. The Bristolian lads use this platform to voice concerns over the success of artists seemingly being based on their image and ability to be pushed onto the consumer. “A lot of bands careers can be made by image alone and we feel it’s a big insult to smaller bands that work hard”, reveals Archie.  Sidekicks continue their emotional purge across the track “Burry your friends”.  The song acts as a musical narrative coming to light after the unfortunate loss of a childhood friend to suicide.

With hope, Everyday Sidekicks approached topics with a sense of significant emotional investment.  “Hope to us is a hugely important factor in life. You constantly have obstacles thrown at you that you need to overcome, times change and sometimes it’s not always good things that come your way. Without hope for things to get better, life can get on top of you”, believes the group’s front man. With this release, the quartet have avoided trapping themselves into a singular sound delivering a fierce sounding and precisely written release. If their future melodies reach the same dizzying heights we shouldn’t have to look far to hear of their success.

Last modified on Wednesday, 15 March 2017 15:31
Read 4202 times
Published in News & Reviews
Tweet
More in this category: « PATRONS - As Above, So Below - Album - Review The Without Have Dropped Their Outstanding Debut EP 'Factions' »