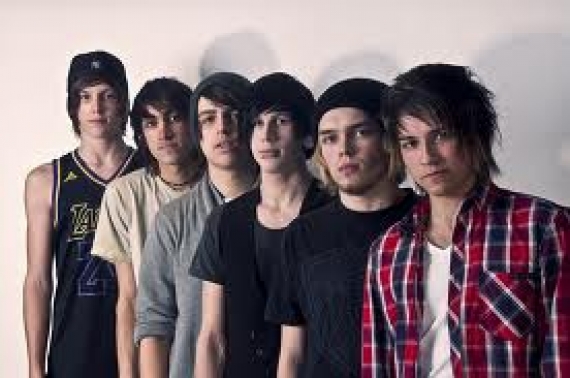 New week! New band! New interview! Autumn Kills is a band from Stockholm (Sweden) that formed in September of 2011.

What artists/bands have influenced you to start the band?

“‘Well, we all have some different influences in the band, but mainly it's bands like All Time Low, Sleeping With Sirens, Woe Is Me, D.R.U.G.S. and the list could keep going on and on… But I guess we were more excited about creating our own music than focusing on one particular sound influenced by some other band.”

Is playing in Autumn kills very different from playing in your previous bands?

“Yes, it is! Every member in this band have gotten really close to each other and we're like 6 bro's doing something we love together, No doubt!”

Do you prefer the writing and recording process or the touring and playing shows?

“Well, it's a tough question. We can't really say we like one more than the other, it's the whole process of writing, recording and going out on stage that gives us the joy.

Can't have one without the other, we enjoy it all!”

Has the new EP 'When Pigs Wear Ties' gone down well with the fans?

“Yeah, for sure! We had only positive response from our fans. But it's still just our first EP, and we still have a long way to go, but hey! That’s what makes it even more fun!”

What are your plans for prompting the new EP?

“We still have not released the EP for iTunes and some other online music shops, that's what our next move should be. We are also expecting the EP to be up and running on Spotify really soon. For now you can listen to the EP on our website and Facebook.”

Is there any particular band or artist you would like to work with or tour with? and why?

“Ohh yes! There are many bands we'd love to tour with, or even get a chance to work with. It would be really hard to just pick one band out of the bunch out there.

So we can't really give you an answer to that question.”

Where do you hope/realistically see yourselves/band in 5 or 10 years’ time?

“Well, we've always been dreaming of moving to Los Angeles and living the dream there. But you never know where life takes you; hopefully we are getting a chance to play with the big guys and going on a world tour together.”

Why should people listen to 'Autumn Kills' ?

“I think we give something more than just music to people, Showing them our lifestyle and inviting them to our hearts is as important as the tunes we play.

We try to give back as much as possible to the people that show their dedication to the band and we promise to do that until the very end.”

Do you have any plans for a UK tour?

“Nothing booked for the moment, but we have many friends and fans in UK. We've talked about some gigs in there; hopefully we can make that happen in a near future.”

Describe the band in 3 words.

So make sure you check out these guys and have a listen to their EP ‘When Pigs wear Ties’ by going to their Facebook page http://www.facebook.com/AutumnKills . You won’t regret it!

Read 4901 times
Published in Interviews
Tagged under
Tweet
More in this category: « Lucas Hardy from the city calls - interview We Are The Ocean - Interview »